Native American Life
Buffalo Grove is located within the traditional homelands of multiple Indigenous nations including, the Peoria, Očhéthi Šakówiŋ (Sioux), Myaamia (Miami), Kiikaapoi (Kickapoo), Hoocąk (Ho-Chunk), and Bodéwadmiké (Potawatomi). Many early European settlers wrote about their experience with the Potawatomi, who they encountered when traveling near Buffalo Grove in the early 1800s. In the 1830s, after the Treaty of Chicago, the United States government forced the Potawatomi to move west. Shortly after that, German immigrants settled in Buffalo Grove to farm.

Early European Settlers
The very first pioneers to come to the Buffalo Grove area came from New England around 1834, and stayed for about 5 years. Many of them had received land grants from the government and came to settle on their frontier property. Early land records show a mix of English, French and Scotch names including Napoleon Periolet, Richard Adams, and Job Tripp. Captain Daniel Wright and Mr. Amos Bennet have been recognized as the first non-native settlers in Lake County. 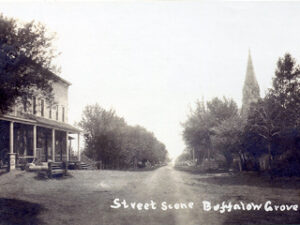 German Immigrants
In the 1840s many of the first homesteaders sold their land to German immigrants fleeing their homeland. Living conditions in Germany were bad, so the cheap yet fertile land in America was very appealing. Most new immigrants settled by people who shared their religion and nationality. German Catholics mainly settled together in the Buffalo Grove area, German Lutherans decided to live in Long Grove, and German Presbyterians moved to Wheeling. After they bought the land, the settlers worked to turn the early farms and wilderness into their own community.

Early Families In Buffalo Grove
Many early families sent one person ahead to see if Buffalo Grove was a good place to live, and if they thought it was, the rest of the family would follow. Some say that John Simon Henneman came in 1846 and sent word to family and friends in Germany for them to come to Buffalo Grove. Jacob Weidner, who was known as Little Jake, was 27 years old when he came to Buffalo Grove to scout out the area for his family. Little Jake liked the land so much that he asked his father, his 5 brothers, his uncle and their families to come live in Buffalo Grove. 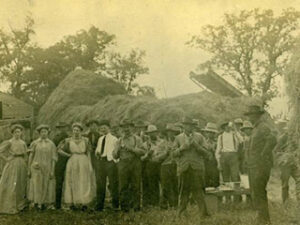 Melchior Raupp was the settler who had the longest journey before ending up in Buffalo Grove. He first came to Buffalo Grove in 1847, but he could not afford the farm he wanted. Next, he traveled to Wisconsin to see if he would like it there. He thought the farmland looked good, but he also thought there were not enough people, and it would be too lonely to live there. Melchior then headed west on a wagon train after hearing about the gold in California. The few nuggets that Melchior found did not make him rich, in fact, he had to walk back to Buffalo Grove. When he got back, he took a job with a farm family until he was able to earn enough money to buy the farm he wanted and start a family. 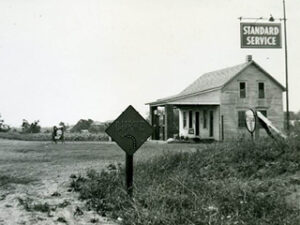 The First 100 Years – 1847-1947
The first Buffalo Grove families formed a small but active community, centered around farming, religion and education. They built the first St. Mary’s Church in 1852 and the first St. Mary’s School in 1855. By 1899, downtown Buffalo Grove had grown with the addition of the Firnbach Tavern and the Weidner General Store. The farmers could now shop, worship, and get an education in Buffalo Grove. Where did they go if they wanted more choices? Arlington Heights, Wheeling, Libertyville, and Half Day were all nearby towns which were larger than Buffalo Grove. Families also took trips to Chicago for business and for fun. They could take the train from Prairie View train station or travel by wagon or car down Milwaukee Avenue.

After WWII – Buffalo Grove Grows
At the end of World War II in 1945, Buffalo Grove was still a very small dairy farming community, with fewer than 200 residents. This would change dramatically in the next twenty years. What happened? A combination of many different circumstances caused the community to grow very quickly:

• Older farmers were retiring, and their kids did not want to farm.
• All returning WWII and Korean War soldiers could get a VA (Veteran’s Administration) loan, which meant many more people could afford houses than ever before.
• New highways were being built which made commuting to Chicago possible.
• New methods of construction meant that it was easy to build a lot of houses very quickly and cheaply.

All of these factors combined to change Buffalo Grove from a small farm town into a growing suburb in just over ten years. The first housing development in the area was built by Al Frank in 1958. By 1970, Buffalo Grove had grown to a population of over 11,000 people, with 6 schools and a park district.

1970- Present
Buffalo Grove continued to grow throughout the 1970s and 80s. New houses were built in both Lake County and Cook County, new parks were added throughout the area, and new residents continued to move to the community, valuing its emphasis on education and excellent park system. By the early 2000s, Buffalo Grove’s population had grown to over 40,000 people, and it remains close to this figure today.

Further Information
If you have more questions about Buffalo Grove history, please visit the museum, or contact us with research questions at museum@bgparks.org.

Install this application on your home screen for quick and easy access when you’re on the go.